Cyfres: Lives and Beliefs of the Ancient Egyptians

This book is about the weird and wonderful lesser-known ‘spirit’ entities of ancient Egypt –daemons, the mysterious and often fantastical creatures of the Egyptian ‘Otherworld’ – and the closely related spirits of the dead, which together conjure the excitement of all things otherworldly. Daemons and spirits are generally defined in Egyptology as creatures not of this world, which do not have their own cult centre, and both groups are frequently listed together in protective spells. This volume explores the general nature of daemons and spirits in ancient Egypt and discusses a selection in more detail: it uses artefacts from Wales’s important collection of Egyptian objects at the Egypt Centre at Swansea University, in which are to be found a dwarf daemon with sticking out tongue; several guardian daemons of the Otherworld; creatures who are part snake and part feline; spirits of deceased humans; and a Greek satyr Silenus, companion to the wine god Dionysus.

‘A devilishly good read intended for scholars and enthusiasts alike, Daemons and Spirits showcases the impressive holdings of the Egypt Centre … It is beautifully illustrated and meticulously researched.’

List of figures
Chronology
Dedication
Acknowledgements
Preface
Chapter 1 : Introduction
Chapter 2 : The Realm of the Dead and Daemons, the Otherworld
Chapter 3 : Early Daemons and a Magic Wand
Chapter 4 : Those with sticking out tongues, dwarves, hippopotami and problems of gender: Daemons from the New Kingdom and later.
Chapter 5 : Spirits of the Dead
Chapter 6 : Daemons on Coffins, the Book of the Dead and the Star-lit Sky
Chapter 7 : Quasi-Daemons
Chapter 8 : Conclusions
References

Carolyn Graves-Brown is Curator of the Egypt Centre at Swansea University. 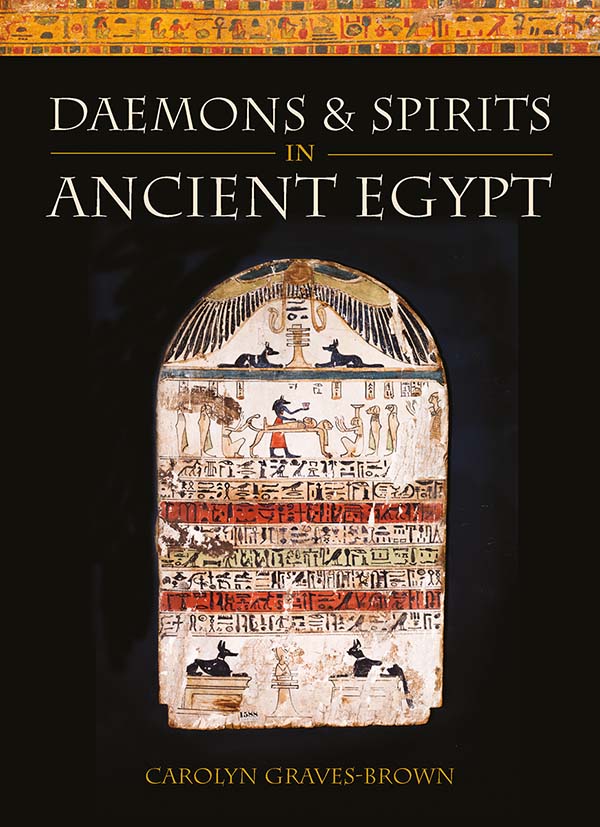