‘Insightfully tracing the commercial commodification of both reading material and the reading activity itself among Romantic-era women readers and writers, Minerva’s Gothics will make an immediate difference to the ways in which we think about Romantic-era fiction, and indeed about Romantic-era reading practices generally.’
-Professor Stephen C. Behrendt, University of Nebraska

‘Minerva’s Gothics offers a much-needed and utterly compelling reappraisal of the oft-derided publications of the Minerva Press. Through its combination of exemplary statistical analysis and more traditional qualitative methods, the study presents a persuasive counter-narrative to conventional accounts of Minerva works as sordidly unoriginal, detailing as it does so a new and richly rewarding interpretive lens through which to view Romantic-era popular fiction.’
-Dr Christina Morin, University of Limerick

‘In Minerva’s Gothics, Elizabeth Neiman offers a revisionary account of Romantic circulating-library fiction, exposing its savvy, self-aware use of narrative formulas and tracing its contribution to the major intellectual debates of the day. Expansive, spirited and lucid, this book is a vital resource for anyone interested in the history of popular fiction.’
-Dr Yael Shapira, Bar-Ilan University

‘Minerva’s Gothics combines deeply-researched publication data and other modes of distant reading with elegant close reading both of some fifty largely forgotten novels (most by women) published by the Minerva Press and of some of the most canonical works of British Romanticism. By doing so, Neiman makes clear that the Romantic period was centred in an exchange and dynamic interrelationship between the popular collective (or “generic”) model of authorship fostered by the Minerva Press and canonical Romantic writing and theories of individual genius. Minerva’s Gothics is a major advancement both in substance and methodology, and it will henceforth be a de rigueur point of departure for the study of British Romanticism as a period.’
-Professor Edward Jacobs, Old Dominion University

‘Minerva’s Gothics is the first monograph study in eighty years of one of the most influential yet nearly forgotten publishers of fiction during the Romantic period. In an engaging and timely intervention, Elizabeth Neiman establishes that the true of the Minerva Press during its fifty-year history lay in its unique employment of numerous women authors of purposefully formulaic works, creating a rich and enduring literary network. Nuanced close readings of under-examined Minerva novels against the works of canonical writers (Wordsworth, Wollstonecraft, Shelley) anchor the wider analysis of the Georgian literary marketplace in a compelling and original way. This book will introduce readers who know little about the Minerva Press to vital information regarding its role and significance within Romantic literary culture, while serving those already familiar with the Press with original arguments and fresh analysis that break important new ground.’
-Professor Anthony Mandal, Cardiff University

'Nieman makes a unique, thoughtful, and convincing argument for renewed study of the Minerva novels, their writers, and their impact on socio-political structures of thought in the late eighteenth and early nineteenth centuries. It is rare that an academic book is both informative and entertaining, but Neiman’s tone throughout her monograph strikes
that balance with the extensive information on reading culture, book history, literary analysis, and socio-political explanation. She not only contributes valuable scholarship to the movement to elevate “lower” forms of literature, but she also provides a model for how literary studies can utilize and articulate data-driven research.'
- Laura R. Kremmel in Eighteenth-Century Fiction. Read the full review here https://bit.ly/39u3Eff

Table of Contents
Preface:
Chapter 1: Remapping Minerva’s influence on the novel market
Section One: Feminist Discernment and Minerva’s
Production of Romantic Fantasy
Section Overview
Chapter 2: Julies and St. Preuxes: Networking ‘lady’ authors, 1785-9
Chapter 3: Wollstonecraft and the revolutionary feminist novel:
At a crossroads with Wordsworth
Section Two: The Revolution Debate in Britain: Minerva and the Politics of Feeling
Section Overview
Chapter 4: Providential adaptations to the romantic fantasy, 1790-4
Chapter 5: Godwin and Providential feeling in Things As They Are:
Meeting readers where they are
Chapter 6: Providential feeling at Minerva’s zenith: what the commoner teaches the nobleman
Section Three: The Forgotten Poetics of Romantic Exchange: Gothic Habits of Mind
Section Overview
Chapter 7: Minerva’s continued influence: the Poet as Nightingale in Shelley’s 1810 Gothics
Chapter 8: Reinstating romantic fantasy in Minerva’s ‘late’ novels: Romanticism and ‘Gothic’ habits of mind
Afterword
Bibliography
List of Tables:
List of Figures: 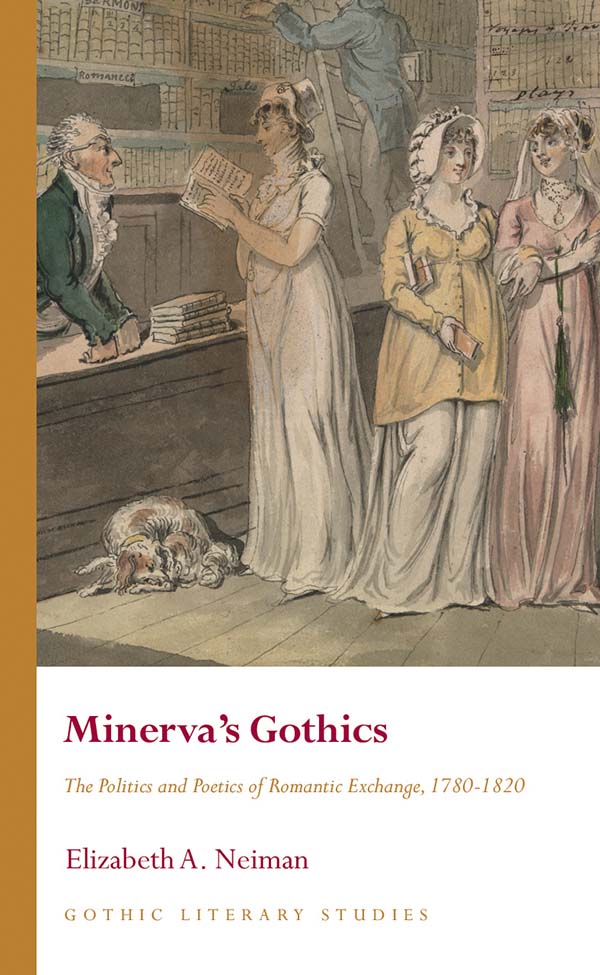