This book is an investigation of the foundation and evolution of romance in Iceland. The narrative type arose from the introduction of French narratives into the alien literary environment of Iceland and the acculturation of the import to indigenous literary traditions. The study focuses on the oldest Icelandic copies of three chansons de geste and four of the earliest indigenous romances, both types transmitted in an Icelandic codex from around 1300. The impact of the translated epic poems on the origin and development of the Icelandic romances was considerable, yet they have been largely neglected by scholars in favour of the courtly romances. This study attests the role played by the epic poems in the composition of romance in Iceland, which introduced the motifs of the aggressive female wooer and of Christian-heathen conflict.

‘This large-scale consideration of the foreign and native influences on the evolution and development of medieval Icelandic romance marks a stimulating new turn in riddarasögur scholarship which will be of significant interest to medievalists outside the field of Old Norse as well as to Scandinavian specialists.’
-Professor Geraldine Barnes, University of Sydney

‘In this new and definitive history of romance in medieval Iceland, Professor Marianne E. Kalinke shows how, from the first translations from French into Norwegian through to the popular and inventive late romances composed in Iceland, the north embraced the new genre. Kalinke’s achievement is to persuade us that the Icelandic romances bear comparison not only with the great family sagas but also with romance texts from elsewhere in medieval Europe.’
-Professor Carolyne Larrington, University of Oxford

‘Kalinke’s close readings, following the development from French originals, over Norwegian translations and Icelandic rewritings to the indigenous riddarasögur, as well as her comparisons of variants of the same text, provide us with a much clearer picture than we have had before of the evolution of medieval romance in Iceland.’
-Professor Else Mundal, University of Bergen

‘Stories Set Forth With Fair Words is a brilliant, elegantly written book that contains deep analyses of the most widely transmitted and popular group of the Old Norse and Icelandic saga-literature. Such important issues as gender, senses, emotions, desire are treated in excellent close readings of representative sagas, as are the rewriting, variance and long-time transmission of these texts from the late thirteenth to the seventeenth centuries.’
-Professor Jürg Glauser, University of Zürich, Switzerland 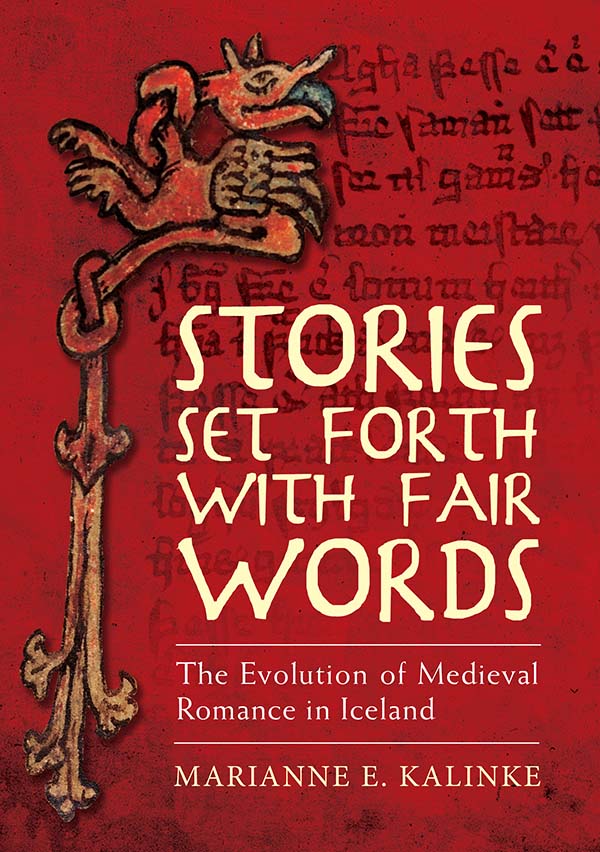